Air conditioners come in different shapes and sizes. However, when you are in commercial and industrial fields, you will see a lot of different types. And one of the most fascinating types is commercial mobile cooling. Sure, you can find mobile ACs in residential areas, but they are a lot smaller than industrial and commercial ones.

Here are the 9 facts you should know about Commercial Mobile Cooling.

What Is Commercial Mobile Cooling? 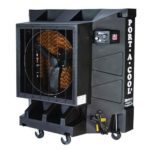 There are many differences between traditional conventional ACs used in commercial and industrial areas and mobile cooling. The first and foremost difference is that commercial mobile cooling is, well, mobile. Conventional cooling units are fixed to one place, and they can’t be removed from there unless the situation warrants it. And even then, the process is a long and tedious one. mobile cooling can be moved around, which means you can get cooling wherever you want.

All other differences stem from the above-mentioned one. For instance, commercial mobile cooling is smaller and lighter in comparison. Sure, the weight and size are not reduced to the point where it becomes portable, but they can still be moved due to the attached wheels. And given their smaller size, they consume a lot less energy. Another thing that separates both is their limitations, as commercial mobile cooling is capable of providing cooling for a fixed area, compared to the entire building of conventional ones. 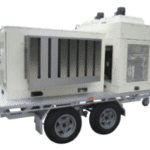 Mobile cooling is very easy to install, and there are many reasons for it. For instance, the existing electrical connections and outlet locations would still work, so there is no need for alteration. This gives the freedom of plugging the unit anywhere with the outlet. This ease of installation has raised the popularity of commercial mobile cooling.

Surprisingly, or not so surprisingly, the working of commercial mobile cooling is similar to that of traditional air conditioning units. Similar to other ACs, mobile air conditioners suck hot air from their surroundings. It is then treated to be dehumidified and to bring down its temperature. In the end, the treated air is released back to provide cooling to the specified place.

Given their small size, mobile air conditioners consume a lot less energy. This not only reduces energy consumption, it also significantly decreases the relevant energy bills and money.

Another notable fact about these units is that often enough, they do not serve only as air conditioners. They can also act as electrical heaters and dehumidifiers. In other words, these multifunctional devices can serve a lot of purposes. 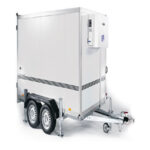 Mobile cooling is very eco-friendly, making it a favorite of people who are conscious about such things.

It’s not all roses and sunshine. Commercial mobile cooling, no matter how efficient, still has some severe limitations. Namely, the cooling it provides is only for a limited area. Commercial Mobile cooling units are only capable of cooling down a limited space instead of the entire building.

Of course, mobile cooling units are smaller in size, so it obviously makes sense that they would save a lot of space. You don’t need to fix it to one place, and put aside a lot of space only to house the air conditioning unit.